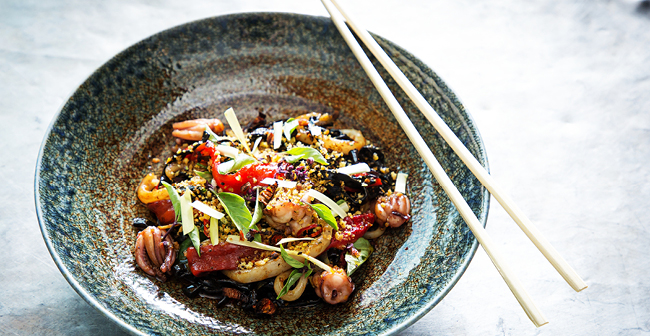 From On Tap Magazine‘s September Issue by Lani Furbank:

“On Tap keeps locals in the know about the hottest new food and drink spots around town, the top culinary news of the month and recent closings. Read on to get the inside scoop on what’s new, notable and no longer in the DC area.

Bistro 1521
Open: July 31
Location: Arlington
Lowdown: This new restaurant from Jo-Jo Valenzuela and Manny Tagle is feeding the DMV’s passion for Filipino food. Bistro 1521, named for the year Ferdinand Magellan discovered the Philippines, serves up home-style dishes made by Filipino cooks. Valenzuela likens it to food you might enjoy if you were invited to eat at a Filipino family’s dinner table. Staples include sisig (grilled chopped pork ears and pork belly), lumpiang Shanghai (deep-fried chicken spring rolls), ukoy (deep-fried veggie fritters with shrimp) and various iterations of pansit (noodle salad). Valenzuela and Tagle are also branching out with their own takes on kare-kare (ox tail in peanut sauce) and mechado (braised beef short ribs). The backdrop for the cuisine is a spacious, 220-seat dining room (formerly Applebee’s), with a large bar and additional seating for 300 on the outdoor patio. As a barkeep, Valenzuela was most excited about the drink menu, which puts the focus on Filipino beers and cocktails made with Filipino flavors like jack fruit, tamarind and white pepper. I was enamored with the Rizal, a Rickey variation made with Edinburgh Gin, spiced guava-calamansi soda and lime. 900 North Glebe Rd. #100, Arlington, VA; www.bistro1521.com

Falls Church Distillers
Open: July 8
Location: Falls Church
Lowdown: Falls Church is now home to the first new distillery to open in Fairfax County in over 80 years. Father and son duo Michael and Lorenzo Paluzzi are behind the craft distillery and restaurant hybrid. Michael’s Italian heritage provided a strong background in wine and liqueur production, while Lorenzo learned the art of fermentation and distillation during his time at Longwood University studying biochemistry. Now, Lorenzo handles the distilling, while Michael, with his decades of experience in IT sales, handles the business. Their compact but sophisticated distillery pumps out bourbon, vodka and gin, with plans to expand to rum and fruit brandies in the coming months. These spirits are available for sale in the official ABC store onsite, which doubles as a tasting room. Distribution will expand to local bars in the near future. On the other side of a wire wall, the restaurant offers Italian wines, draft beer and Italian small plates, sandwiches and entrees made from Michael’s grandmother’s recipes. 442-A South Washington St. Falls Church, VA; www.fcdistillers.com

Fox Loves Taco
Open: Late August
Location: Brookland
Lowdown: Jena and Matt Carr, the owners of Little Red Fox, say they practically live on breakfast tacos, so it makes sense that the crowd-pleasing dish is the star of their next endeavor. Fox Loves Taco aims to be a playful neighborhood staple, with plenty of seating, a family-friendly atmosphere, and affordable food and drink. Their beverage menu features Coava Coffee from Portland, Oregon, with espresso drinks, pour-overs and drip coffee, as well as aguas frescas like watermelon basil and horchata. There are plenty of tacos to choose from, with many vegan and vegetarian options including the cauliflower chorizo taco with carrot and jalapeño slaw and salsa verde, and the migas taco with scrambled eggs, tortilla strips, hominy, cheese and hot sauce. The flour tortillas will be made in-house, while the corn tortillas will be sourced from Moctec, a local tortilleria. Of course, Little Red Fox’s pastries and pies are also on offer. 716 Monroe St. NE, DC; www.foxlovestaco.com

ThinkFoodLab
Open: July 11
Location: Penn Quarter
Lowdown: José Andrés and his team are angling to dive further into the fast-casual restaurant scene, so they’ve created a test kitchen to try out their new concepts. The space, called ThinkFoodLab, hosts a rotating series of pop-ups that will evolve based on feedback from customers. The ultimate goal is to launch each concept permanently after perfecting the menu and service. The first restaurant to call the lab home is Pepe, the group’s casual Spanish food truck. The test menu includes crispy pan de cristal sandwiches, satisfying salads, zesty gazpacho, patatas bravas and creative soft serve flavors like leche merengada. These items will be available until Executive Chef Joe Raffa decides Pepe is ready for its permanent debut. In the meantime, I’ll be coming back again and again for the addictive Pepito Ternera sandwich, with flat iron steak, roasted peppers, caramelized onions and cheese. 701 Pennsylvania Ave. NW, DC; www.thinkfoodlab.com“

Read the rest of the story HERE or HERE!